So I’ve decided to give Microsoft Azure a try. Coming from AWS, it really is difficult to expect another cloud that can be comparative. I’m just going to say that up front.

I deployed an Ubuntu instance of the smallest size. I installed ownCloud on it figured it’s pretty cool to sync my files across multiple computers. Took me a while to figure out how to add a second drive to the instance. The graphical azure portal is pretty but not the most intuitive at times. I spent so much time going through the storage section, but finally found that it’s added inside the virtual machine section. Why can’t they add a box where I can type and it displays the related links concurrently? Windows 8 has that, OSX and Gnome have that too.

The newer portal doesn’t make things more reachable. For instance, where can I find my console? Turns out there is no console available. Should something goes South, you will need to download the vhd, fire it up on a local Hyper-V box. Ridiculous. That makes CloudStack’s console proxy so much more advanced! It is also impossible to attach a secondary, private network to a VM. I had to create a “capture” aka snapshot and spin up a new VM.

Most of the operations I tried are rather slow. Took me about 10 minutes to deploy a 40G image from template.

The stupid thing about cloud, is everything is being named differently, even though they’re not much different from the original hardware version. The term Cloud itself sets the example. Firewall is a firewall, some call it security group, some call it endpoints. Well at least Microsoft still calls virtual machines – virtual machines. Not “EC2 instance”.

Azure’s active directory integration will come in handy. Linux LDAP is a bitch.

Back to the Ubuntu instance, I think the speed in terms of network connectivity and CPU is more or less the same as AWS. It’s just 1 instance so probably can’t be used as a reference. I’ve used other clouds and some of them are really really slow. If you don’t have the money to burn, shutdown your cloud division and go do something else.  Over-subscription to a certain point doesn’t save you money, it drives customers away.

Microsoft gives new customer HKD1,600 credit to burn during a 30-day trial. There is nothing more enjoyable than burning Microsoft’s money. I haven’t checked out Azure’s pricing scheme, but it burned HK$6 a day for the smallest vm, 60G of storage, plus a close to 1GB of data transfer. The $1600 credit will burn in 266 days, shorter than AWS’s free usage tier which lasts for a year. Here are a few instance prices: 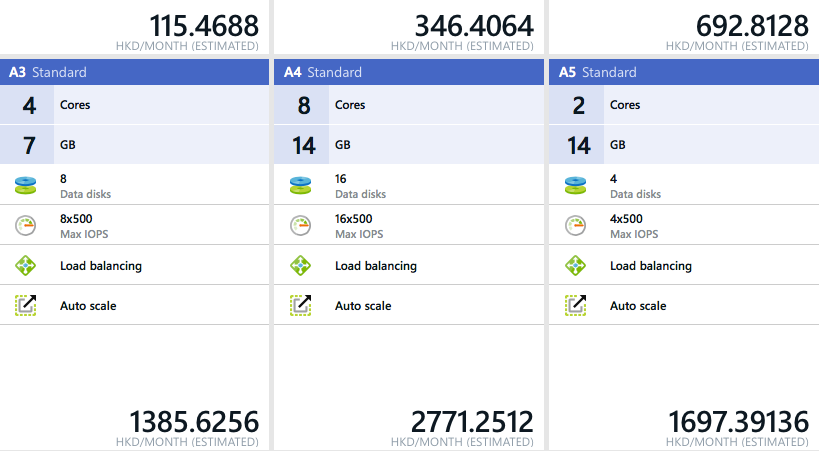 The official pricing calculator can be found here.

This pretty much sums up my first experience with Azure. In other words, nothing exciting.